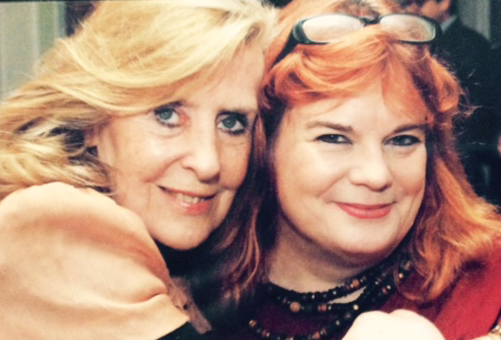 In 2006 Diana Jervis–Read and Sofie Mason launched a new listings website, OffWestEnd.com, which not only listed over 100 independent theatres in one place for the first time but launched The Offies (The Off West End Theatre Awards) in 2010 and brought together an increasing number of commercial, charity and celebrity partners in a mission to support this extraordinary coral reef of excellence and innovation, submerged under the froth and fuss of the glitzy mainstream.

Now, with the expertise and advice of our treasured Trustees and Angels, we are exploring new ways of promoting and developing new writing in the UK and abroad.

Following a baptism by fire in the world of magazines in London, Diana worked in the feature film and theatre industry based in London – working there, in Europe and further afield. After working on the production of nine feature films and two television shows, she worked on the West End production of BRIEF LIVES at the Criterion Theatre, directed by Patrick Garland.

An exciting job offer then took Diana to Los Angeles where she worked for an independent film and music company producing feature films. She read film scripts for executive producers and worked in film production with various producers, as well as on feature film soundtracks with Quincy Jones. Diana also worked on the play FFEIFER’S PEOPLE at the Factory Theatre in LA before moving to Toronto.

Whilst in Canada Diana conducted research for an historical feature film based on the internment of the Japanese people in Canada during WWII, before going to work for Young People’s Theatre. YPT toured seven equity shows in schools throughout Ontario at any one time as well as putting on plays in their new building, which Diana was instrumental in raising the funding to build. After producing and directing an award winning children’s television series, FISHTALES, she moved home to London.

As Cultural Representative for Ontario for nine years, Diana worked with the Shaw Festival, Stratford Festival, Mirvish Theatres and the very many theatres in Toronto and across the Province to bring their work to the UK and create exchanges and collaborations. She also represented all performing arts, film and TV, as well as the visual arts – and ran a gallery and performance space for showcasing new work.

Diana’s most recent job was as Cultural Attaché for Canada, responsible for all art forms and cultural industries, based at Canada House in London. She brokered many deals and showcased theatre companies, producers, directors and writers from across Canada all over the U.K., with a strong focus on festivals and international exchange. Bringing creative talent together to make new projects possible.

In 2006 Diana co-founded OffWestEnd.com with Sofie Mason and then went on to co-found the OFFIES, OWE Plays and Playwrights with our Adopt a Playwright Award and to partner with INTENT Theatre on the Kosovo project.

Having studied English Literature at university, Sofie was prepared for everything and nothing. She launched into the 80s as a political activist – working variously in the civil service, national newspapers, printing and advertising – the job was immaterial so long as she could better understand the human condition, build collective action against injustice and convince her colleagues to have the confidence to take on the world.

In the 90s, having accidentally acquired some skills, Sofie became Advertising Manager at The Royal Opera House and subsequently the Head of Sales, initially maximising advertising revenue and then increasingly establishing partnership deals and developing sponsorship packages as well as heading up the Box Office management team. She discovered she was a hopeless manager but fell in love with the power of story-telling as well as with the very clever scenic artists, prop makers, wig makers, wardrobe mistresses, stage crew, orchestra, chorus, directors, actors and everyone who made the magic happen. She stayed for ten years and became the first female Branch Secretary of the Royal Opera House BECTU Union Branch.

In the noughties, Sofie left the Royal Opera House to become a freelance fundraiser and started her own company, Theatre Partnerships, with the aim of raising awareness and funds for off-West End and fringe theatres. She worked part-time for music agents Askonas Holt, advertising agency Hart Advertising and media and entertainment union BECTU.

With the invaluable help of co-founder Diana Jervis–Read, Sofie launched a new listings website, OffWestEnd.com, which not only listed over 100 independent theatres in one place for the first time but launched The Offies (The Off West End Theatre Awards) in 2010 and brought together an increasing number of commercial, charity and celebrity partners in a mission to support this extraordinary coral reef of excellence and innovation, submerged under the froth and fuss of the glitzy mainstream.

By the tensies, Sofie and Diana were making plans to hand over OffWestEnd.com to a new team and did so in 2017, just after the tenth anniversary of OffWestEnd.com. Sofie is now dedicating herself to building up the charitable work of Off West End Plays & Playwrights and also hoping to be a published novelist on the side.